Our case studies are designed to

offer you valuble information about

The Housing Association was able to save £120K on access costs over 3 decorating cycles!

A complex project, with logistical and political intricacies read on to find out how we managed to fully restore the external façade of Ursa Court with limited disruption to locals or residents.

Spectrum was approached by a Housing Association to renovate the external façade on a block of flats in the centre of Brighton.This was at five-story apartment block with around. 218 apartments. Due to its location both on the main road and only 1 mile from the oceanfront many years of traffic and environmental pollution had left this building in a very soiled state. This Building had been branded an eyesore by the local council for years. The location of the site meant many of its elevations were deemed impossible to renovate without significant disruption.

This Blocks location was one of the most challenging aspects of this restoration project and the reason why it had not been cleaned for many years. The client had been told that the building could not be cleaned due to the level of staining. They had been advised that this block would need an entire re-paint. When Spectrum came to sample a section of the building, they quickly determined that this was a silicone render and could, therefore, be cleaned with the Spectrum Render Restoration method. 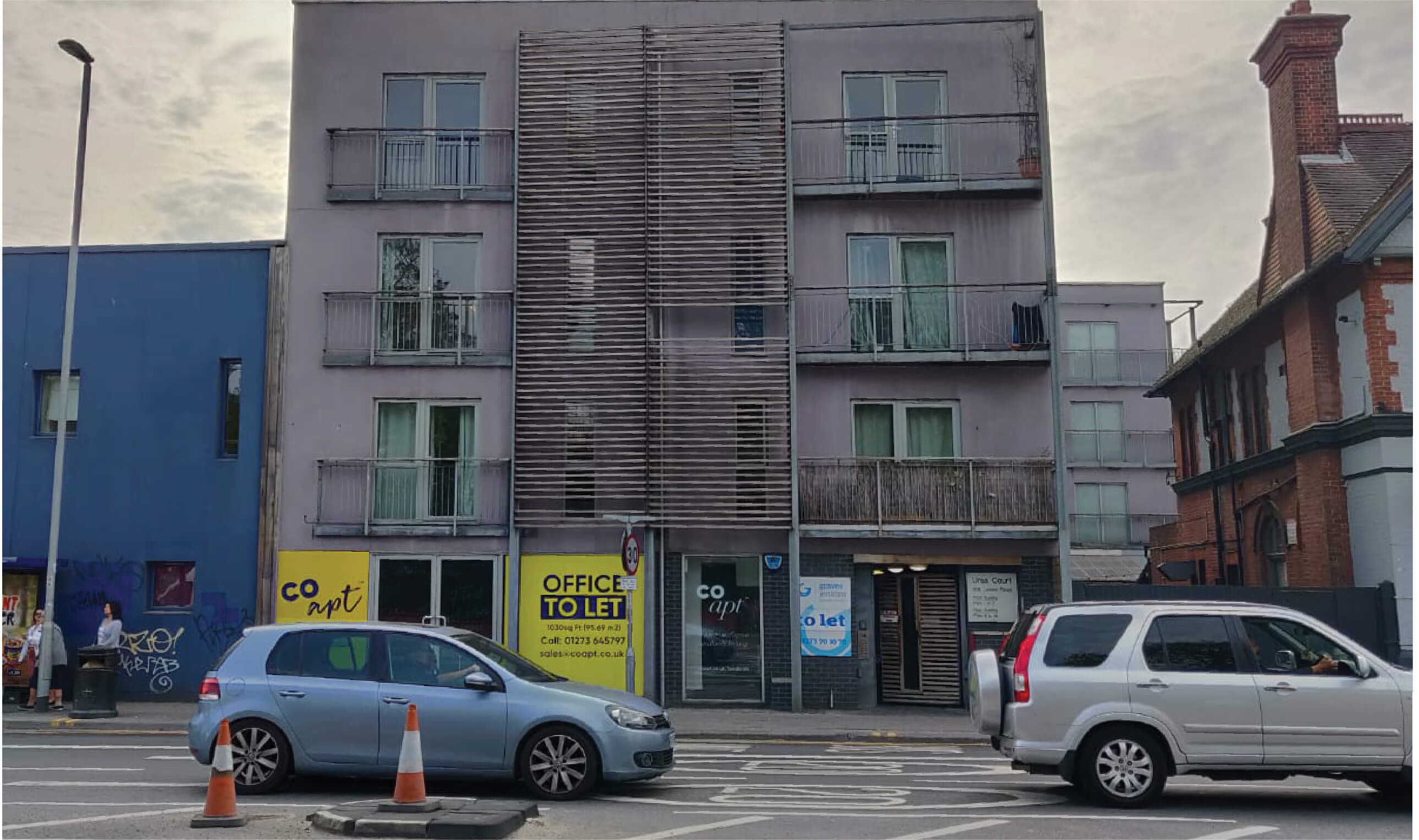 This building, however, had some of the most challenging access issues Spectrum had ever come across. Each elevation had its difficulties. Reference Image 1 below, we will explain what these were.

Elevation A – Lewes Road arguably one of the busiest roads in Brighton. On the left-hand side, a bus stop with regular buses stopping every few minutes and directly underneath , a Taxi Office which was open 24 hours a day.

Elevation B – This ground floor was within the garden of a very popular pub.

Elevation C – A a very steep incline meant any machinery used would have to be extremely special, and a partial road closure would be required to gain access to the elevation.

Elevation D – Was inside the Brighton and Hove bus station with 29 buses and coaches needing to manoeuvre in and out of the depot all day.

There were a lot of technical access challenges; However, there were also some political challenges too. The Bus station had rigorous protocols on health and safety, and if anyone were to gain access to the back of this bus station, they would need to undertake the same health and safety training their staff would have. The pub were not allowing any disruption to their garden especially during some of the busiest months of their year, gaining access to this would remain a challenge for Spectrum too.

With Spectrum considering all of the above. The method of cleaning would consist of combining two access strategies. 15% of the building would be cleaned via rope access in which an A-Frame portable anchor device would be brought to the site as there was no fixed anchor on the roof for the abseilers to use. The remaining 85% would be cleaned via the Spectrum Patented Render Cleaning System. This system would enable much of the work to be done from the safety of the ground without the use of any expensive and disruptive scaffolding, M.E.P.U. or specialist equipment. This access strategy alone was set to save the client over 30%! With an access method proposed, the political issues would need to be addressed for these planned works to be approved by all parties.

Spectrum Went Above and Beyond

To address the political challenges to this site, Spectrum conducted a tri-party meeting, to present a solution to the owners of the surrounding affected sites. Spectrum organised for their team to carry out the required health and safety training for them to gain access to the base of the bus and coach depot. The bus garage had also informed Spectrum that they had some roof and gutter issues. Spectrum carried out a full inspection for the bus garage as a thank-you for their cooperation to the planned works.

The pub were impressed by the fact that Spectrum would not need to use scaffolding around their pub to gain access to the block and as a gesture of goodwill for their collaboration on this project Spectrum had a credit note raised to them for future use which included a full external clean to their façade and windows.

Once all parties had confirmed they were happy to approve the cleaning works, Spectrum began restoring this building to its former glory. In just over 28 days, Spectrum had applied a biocidal wash, steam cleaned, and future-proofed each elevation with minimal disruption to all parties and the public. In addition to the render restoration, Spectrum had cleaned the stained decking, taken care of the gutters and cleaned all windows and surrounds. A building that had been deemed “impossible” to access and “impossible” to clean had been transformed with no risk to the public or environment.

These planned works would not have been possible without the specialist equipment designed by Spectrum. After being challenged on numerous occasions such as this one to come up with access strategies outside of the ordinary Spectrum had designed 3D printed and manufactured specialist equipment which would enable them to get around some of the significant access challenges with render cleaning and restoration. In 2015 this equipment was granted an official patent. This access and cleaning method is the first of it’s kind for render restoration, and one of the many reason Spectrum are continually approached to help access and restore challenging sites.

The client was overjoyed with the result and grateful for not having to resolve the political and access challenges surrounding their block as this was all taken care of by Spectrum.

Back to Case Studies

When 3 Companies Couldn't Find An Access Solution We Knew We Had To Solve It!

+plus pointOur patented cleaning equipment made this possible.

+plus pointAll rust and lead staining was removed with out PAST process.

+plus pointThrough our removable anchor points, we are able to eliminate the need for scaffolding, offering up to £30,000 in savings to our clients!

+plus point70% saving in access costs - No scaffolding required.

+plus pointUsing our expertise in working at height, we are able to assess all eye bolt and anchor safety points quickly and efficiently.

+plus pointThe powerful yet gentle effects of the DOFF and TORC machines allowed us to remove signs of wear without leaving cracks.

+plus pointOur team of highly credible stone restorers were able to find the exact colour match for the stone by sending it to the lab.

Get Your Free Quotation

Spectrum transforms buildings over the whole of the UK. Call our London based office and we will be happy to discuss your requirements and will be able to provide access to our Spectrum teams and help deliver a plan for your requirements.

We Cover The WHOLE Of The UK!